Why is apple cider vinegar good for you? 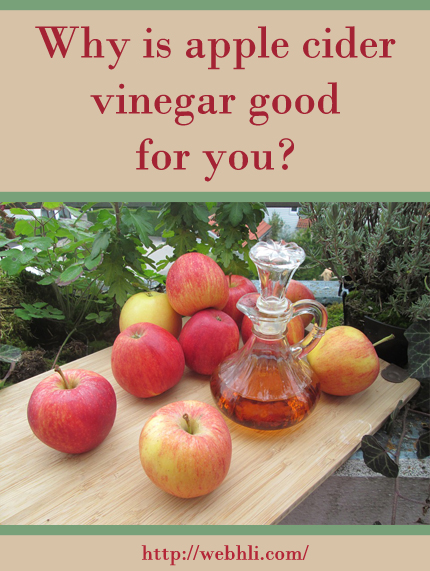 Apples are among the most health-giving fruits available as they contain a host of nutritious properties via: Phosphorous, Chlorine, Potassium, Sodium, Magnesium, Calcium, Sulphur, Iron, Fluorine, Silicon, plus many trace elements, and all of these are found in apple cider vinegar.

Why is apple cider vinegar good for you?

Among other things, apple cider vinegar is very effective in detoxicating various organs in the body together with the blood stream. Hence it is a purifier, as it has a means of breaking down fatty, mucous and phlegm deposits within the body. It therefore, promotes the health of the vital organs of the body like kidneys, bladder, liver etc., by preventing an excessively alkaline urine.

Apple cider vinegar also helps oxidate the blood which consequently prevents the blood from becoming too thick and gluey, which gives rise to a strained heart and blood vessels resulting in high blood pressure. Cider vinegar also promotes digestion, assimilation and elimination and it neutralizes any toxic substance taken into the body.

There have been a number of instances where people who had taken a mixture of cider vinegar and water before a meal were unaffected by diarrhea, or digestive upsets, whilst their companions who ate the same meal were. Hence the cider vinegar seemed to neutralize the harmful substances in the food eaten.

MORE: What’s the best way to detox your body

Potassium Apple cider vinegar has a potent supply of potassium, which has become so widely acclaimed in the helping of various complaints including: running nose. Excessive mucous formation, watery eyes, sinus and catarrhal troubles. Teeth decay and the splitting of fingernails are also signs of potassium deficiency which are remedied by taking apple cider vinegar.

Potassium is essential for the normal growth of the body and for the replacement of worn-out tissues, which depend upon the presence of this mineral. It is as important to the soft tissues, as calcium is to the bones and teeth and it also retards the hardening of the blood vessels. As potassium is so important in the healthy growth of a plant, animal and human, a deficiency of this mineral will produce such tendencies as callous formations on the soles of the feet, or the failure to replace worn-out tissues as observed in the loss of hair.

Tests have proven that a soil deficient in this mineral-salt will produce anemic and undersized plants, however, when potassium is introduced into the soil the plant becomes sturdier and increases in height. This is also the case with animals, where potassium which was fed to livestock, in the form of cider vinegar, improved their appearance and stamina.

Humans too, can benefit with this increased potassium intake. Especially where children are slow developers and appear undersized. A few teaspoons of cider vinegar taken with water each morning will show tremendous results.

The best way to introduce apple cider vinegar to the family, is to substitute it for the ordinary table vinegar and use it in the cooking. Potassium acts as a restraining influence upon those who are over-excitable and nervous. It draws fluid back into the cells, for when potassium is lacking the body cells shrink and their normal activity is restricted.

Published in Health and Remedies